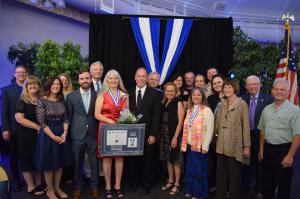 Long-time Scout Leader Peggy Kirk (in red) is surrounded by Scout executives and family of Scout Troop 313, chartered to the Church of Scientology FSO. Ms. Kirk was one of 13 Silver Beaver Award winners at a special ceremony at Busch Gardens this week.

Of all the information which became important to me, such as photography, woodlore, signaling, and many other subjects, the basics of it was laid in Scouting.”
— L. Ron Hubbard

CLEARWATER, FL, US, May 8, 2019 /EINPresswire.com/ — On May 4th, Mrs. Peggy Kirk of Boy Scouts Troop 313, chartered to the Church of Scientology Flag Service Organization, was awarded the Silver Beaver at the 2019 Boy Scouts of America Greater Tampa Bay Area Council Banquet. The banquet was held at Kwazi Gazebo at Busch Gardens and had approximately 100 adult leaders guests in attendance.

“It is said that the Silver Beaver Award is not given to those who seek it; rather, the Council awards it to those who do not.” said Geary Titus, Troop Commissioner for the Greater Tampa Bay Area Council.

Established in 1931, the Silver Beaver Award is presented for distinguished service to young people within a BSA local council. This award is given to Scout leaders who implement the Scouting program and perform community service through hard work, self-sacrifice, dedication, and many years of service. More than 50,000 recognitions have been bestowed to date.

This year’s banquet opened with a reception followed by the Pledge of Allegiance. Guests enjoyed home-style BBQ including ribs, mac & cheese, collard greens and pineapple upside down cake as prepared by Busch Gardens.

The entire Troop 313 Committee was present to support Mrs. Kirk as she received her medal on stage. Mrs. Kirk was one of 13 adult volunteers in the council to be awarded that evening.

“Dedicated volunteers like Mrs. Kirk are vital to the success of the BSA Program.” said Dylan Pires, Community Affairs Director of the Church of Scientology FSO. “They help youth learn life skills that they’ll carry with them for the rest of their lives. Scientology founder L. Ron Hubbard was an Eagle Scout himself and once said, ‘Of all the information which became important to me, such as photography, woodlore, signaling, and many other subjects, the basics of it was laid in Scouting.’”

Troop 313 is open to youth of any faith, as with any troop. Participants in the Scouting program are encouraged to be faithful and loyal, as laid out in the Scout Oath and Law.