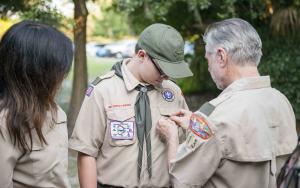 At Boy Scouts Troop 313’s semi-annual Court of Honor parents pinned their sons rank advancements to their Scouting uniform, formally recognizing them for their accomplishments over the last 6 months.

As an Eagle Scout from Troop 313, I learned leadership skills and how to set a good example for others by working for my community through the Scouting program.”
— Dylan Pires, Community Affairs Dir. of the Church of Scientology FSO

CLEARWATER, FL, US, May 23, 2019 /EINPresswire.com/ — On Monday, May 20th, the Boy Scouts Troop 313 held their semi-annual court of honor at Eagle Lake Park. Scouts were awarded merit badges and rank advancements correlating to their accomplishments in the last six months. A full 10 Scouts were formally recognized with rank advancements while 22 merit badges were given to those meeting the requirements.

Chris Lumsden, Scoutmaster of Troop 313, led the Scouts in a Flag Ceremony and Pledge of Allegiance to officially begin the Court of Honor. As is tradition, Scouts lit 12 candles, representing the 12 points of Scout Law, and 3 more candles representing the 3 parts of the Scout Oath.

Boys got their newly earned ranks and gave a pin to their parents as a show of gratitude for their help in achieving the rank. Merit badges such as Fire Safety, Swimming, and Camping were then distributed to each Scout who earned them.

Following Troop 313 tradition, the Scout who made the most progression in his Scouts Manual was awarded a refurbished iron hatchet that was restored by one of the adult leaders. The item awarded varies from year to year and assists the Scout with camping and Scout activities.

Dylan Pires, Community Affairs Director for the Church of Scientology Flag Service Organization said, “As an Eagle Scout from Troop 313, I learned leadership skills and how to set a good example for others by working for my community through the Scouting program. Humanitarian L. Ron Hubbard illustrated this in what he wrote, ‘There are many people one influences. The influence can be good or it can be bad.’”

Troop 313 is open to boys of any faith, as is any troop of the BSA program. Boys in Scouting are encouraged to be faithful and loyal, as laid out in the Scout Oath and Law.

Troop 313 has held their weekly meeting at the Clearwater Community Volunteers Center in downtown Clearwater since its opening last March. The center provides the venue, catering, and equipment as a complimentary service to the boy scouts, as it does to all the non-profit groups that it works with.

To find out more information about the Clearwater Community Volunteers Center or about Boy Scouts Troop 313 please call Michael Soltero at (727) 316-5309 or email ccvcenter@ccvfl.org.

About the Clearwater Community Volunteers:

The Clearwater Community Volunteers have over 25 years of community service under their belt with over 150,000 families and children helped since their founding in 1992. Sponsored by the Church of Scientology Flag Service Organization, they stay true to their reputation of helping others with their new center located on the corner of Fort Harrison Avenue and Drew Street in downtown Clearwater.