North Carolina man, Richard Sexton, is running 750 miles across the Carolinas to raise $50K for autism.

North Carolina man, Richard Sexton, smiles as he prepares to run 750 miles across the Carolinas to raise $50K for autism. 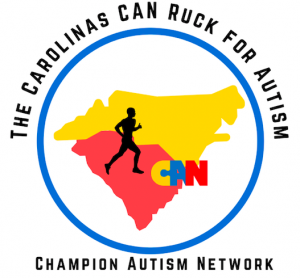 Carolinas CAN Ruck for Autism logo

I’m inspired by individuals living with autism and the daily challenges they face and overcome. They motivate me as I face the challenge of running 750 miles in 30 days.”
— Richard Sexton

HOTHOUSE, NC, UNITED STATES, April 28, 2021 /EINPresswire.com/ — Earlier today, one North Carolina man started the beginning of a unique, month-long journey across the Carolinas to raise money and awareness for autism. At 7 a.m. in Hothouse, North Carolina, along the border of the state with Tennessee, Charlotte resident Richard Sexton kicked off his 750-mile run in an effort to raise $50,000 for the South Carolina-based autism awareness organization, Champion Autism Network (CAN). Sexton aims to run the equivalent of a marathon a day for 30 days while carrying a 25-pound slam ball fondly nicknamed “Slappy” in his rucksack.

From April 28th through May 26th, the ultra-marathon dubbed Carolinas CAN Ruck for Autism, will move from Hothouse, N.C. and run through the mountains of Ashville, across the state to Wilmington and down the coast, ending in Surfside Beach, S.C. near CAN’s headquarters. Sexton will carry “Slappy” the 25-pound slam ball while running to recognize the weight carried every day by individuals and families affected by autism.

Sexton is an experienced ultra-marathoner and endurance athlete who has completed six Iron Man-distance triathlons and run nearly 100 marathons. Inspired by his personal experiences adopting his son from China, as well as his work as an early childhood education substitute teacher, and community volunteer, Sexton, along with his friend and founder of CAN, Becky Large, created the fundraiser to help support individuals and families living with autism in the Carolinas.

“I’m so inspired by these children and families and the daily challenges they face – and overcome. If I can reach my fundraising goal for CAN, while raising awareness of autism in our community, that motivates me and will continue to push me as I face the challenge of running 750 miles in 30 days,” said Sexton.

CAN was founded in 2012 by Myrtle Beach businesswoman Becky Large. Large is the mother of two sons, one of whom is on the autism spectrum. CAN’s mission is to create and expand a network of autism champions, including businesses, local non-profit organizations and individuals with autism, to provide families and individuals with necessary resources for daily life, including a strong community support system.

“We at Champion Autism Network are so thankful for Richard and his enthusiasm for taking on this massive physical endeavor to raise awareness of autism,” said Becky Large. “The funds raised from this extraordinary effort will help to create inclusive communities for those touched by autism by connecting people with each other and the valuable resources they need.”

For more information about the fundraiser, visit https://www.carolinascanruckforautism.com.

About Richard Sexton
Richard is a Charlotte, N.C. marketing and furniture industry professional who is passionate about physical fitness and believes families with challenges need an established support network and access to necessary resources to alleviate their daily struggles. He has run almost 100 marathons and ultra-marathons and completed six Iron Man-distance triathlons, with more to come. Richard became inspired to help CAN through his experiences as an early childhood education substitute teacher and the parent of a child adopted from China. He hopes this effort will further bolster the community infrastructure available to individuals and families of loved ones with autism.

About Champion Autism Network
CAN is a 501(c)(3) organization that aims to increase autism awareness and provide support to families affected by autism. Its vision is to create and ensure inclusive communities where all people CAN happily live, work and play, by building a worldwide network of autism champions including businesses, local nonprofits and individuals with autism, thereby expanding its network and connecting people with each other and the resources they need. #ComePlayWithUs®️ #YesYouCAN®️

About Autism
Autism is a general term used to describe a group of complex developmental brain disorders – Autism Spectrum Disorders. These disorders are characterized, in varying degrees, by communication difficulties, social and behavioral challenges and repetitive behaviors. An estimated 1 in 54 children in the U.S. is on the Autism Spectrum and that number is increasing.