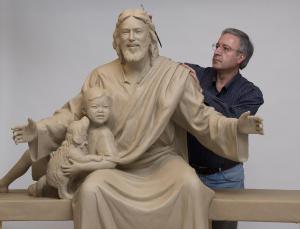 “We're honored to include Victor Issa of Victor Issa Studios into our BoLAA family.” ~Aurora DeRose

The “Best of Los Angeles Award” community was formed four years ago and consists of over 7,600 professional members living and working in Southern California. It celebrates the best people, places and things in Los Angeles with a slogan “No Ads. No B.S. Only the Best.”

“The mission of the community is to celebrate the best of Los Angeles, and allow its community members to connect with other members who share the highest standards of quality and integrity,” expresses DeRose. "We're honored to include Victor Issa of Victor Issa Studios into our BoLAA family."

Victor Issa is a Lebanese-American, first-generation immigrant, and one of the most talented and well-known sculptors in the United States. He has been sculpting professionally for over 30 years, and his pieces of art are displayed worldwide. Issa has proven he has a true gift for capturing and creating incredible liveliness from hard metal from religious figures, celebrities, children, and angels.

Issa’s career first really took off in Colorado. Twenty-three years ago, Issa co-founded The Annual Loveland Fine Art & Sculpture Invitational. After attracting thousands of art enthusiasts and collectors from all over the world for years, the exhibition has become America’s largest outdoor sculpture show. Along with the yearly showcase in Loveland, Issa also owns the Victor Issa Studios, a space where he and other internationally recognized sculptors can create and design.

Issa defines a fine art sculpture in his blog as “an uncompromising and unrelenting pursuit of truth and beauty” (Issa). Issa has consistently created works of art that portray something meaningful, thought-provoking, and uplifting. For example, one of his incredible sculptures, “Power of Thought,” illustrates the depths of the human journey and the influential roles humans can play in society. His devotion and passion for creating sculptures that depict truth and beauty are undeniable.